In a democracy, the polling booth is much more than a location where an unwitting citizen fills in a bubble on a piece of paper in a make-shift booth. It is a symbol of the promise of democracy, a connector between the citizen and the government. It is the shrine that, if protected and respected, powers a democracy.

This article analyzes that symbol of American democracy by taking an analytical look at a dataset of U.S. polling places, compiled by the Center for Public Integrity. Thanks to the great work done by CPI, information on polling place locations and addresses is available for over 30 states for the 2012, 2014, 2016, and 2018 elections. Using a variety of exploratory and modeling techniques, I will analyze the data to answer the following questions:

Let’s start by taking a look at the data.

In the dataset we can see quite a bit of information! Each row corresponds to a polling place available during a given election. So in 2012 at the Agricultural Museum - Fairgrounds polling place, there were two elections: one for House races and one for President, thus resulting in two rows of our dataset. For each polling place we can see a few things of interest, including the location of the site, the number of people who voted in that state election (NOT the number of people who voted at that site), the population of the state, and so on. 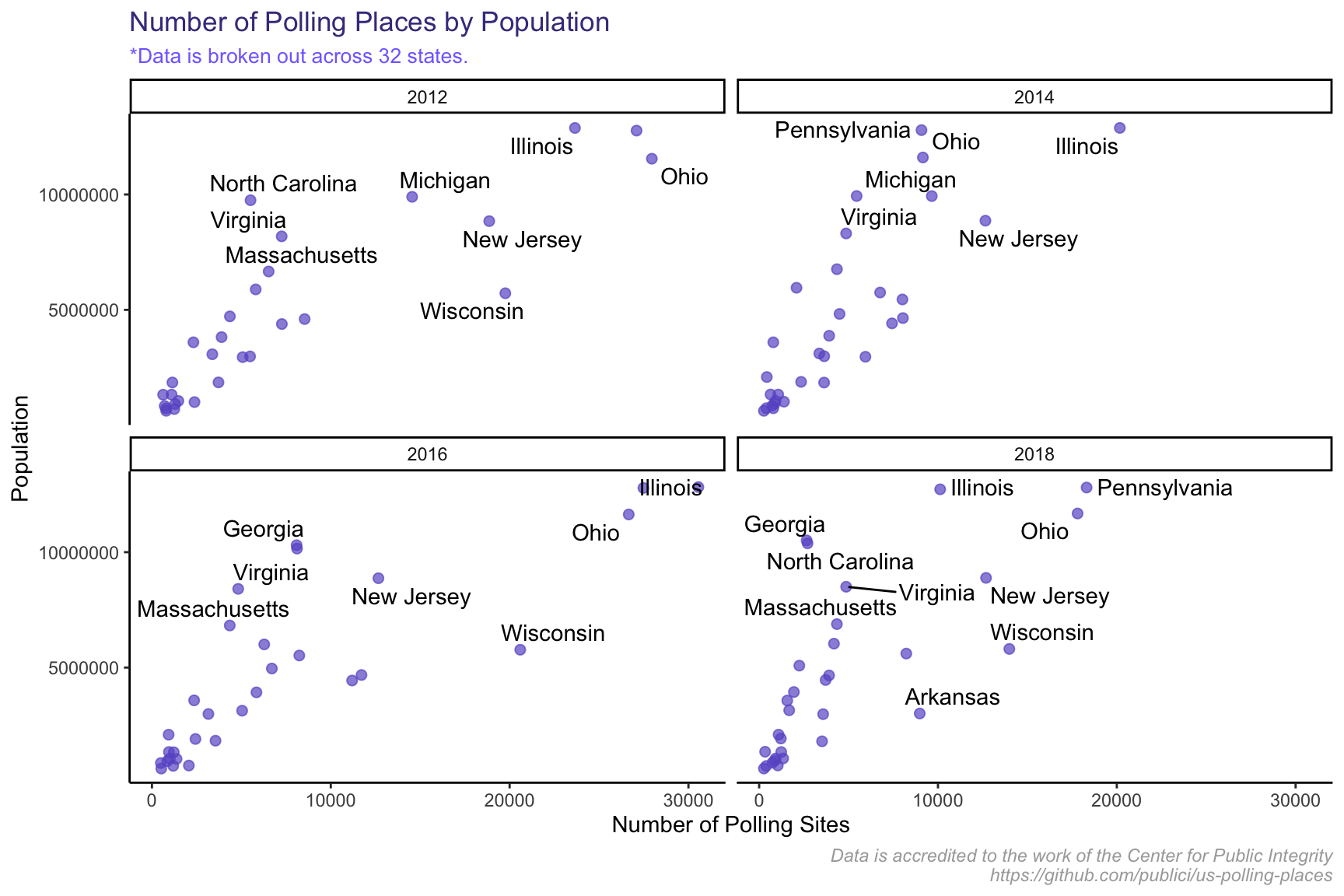 As population increases, the number of polling sites also increases. This trend holds steadily true for each election, regardless of whether there was a Presidential election (2012 + 2016) or just House/Senate elections (2014 + 2018).

Let’s get a better look at which states had proportionally more polling places than they did general population (the per capita rate). 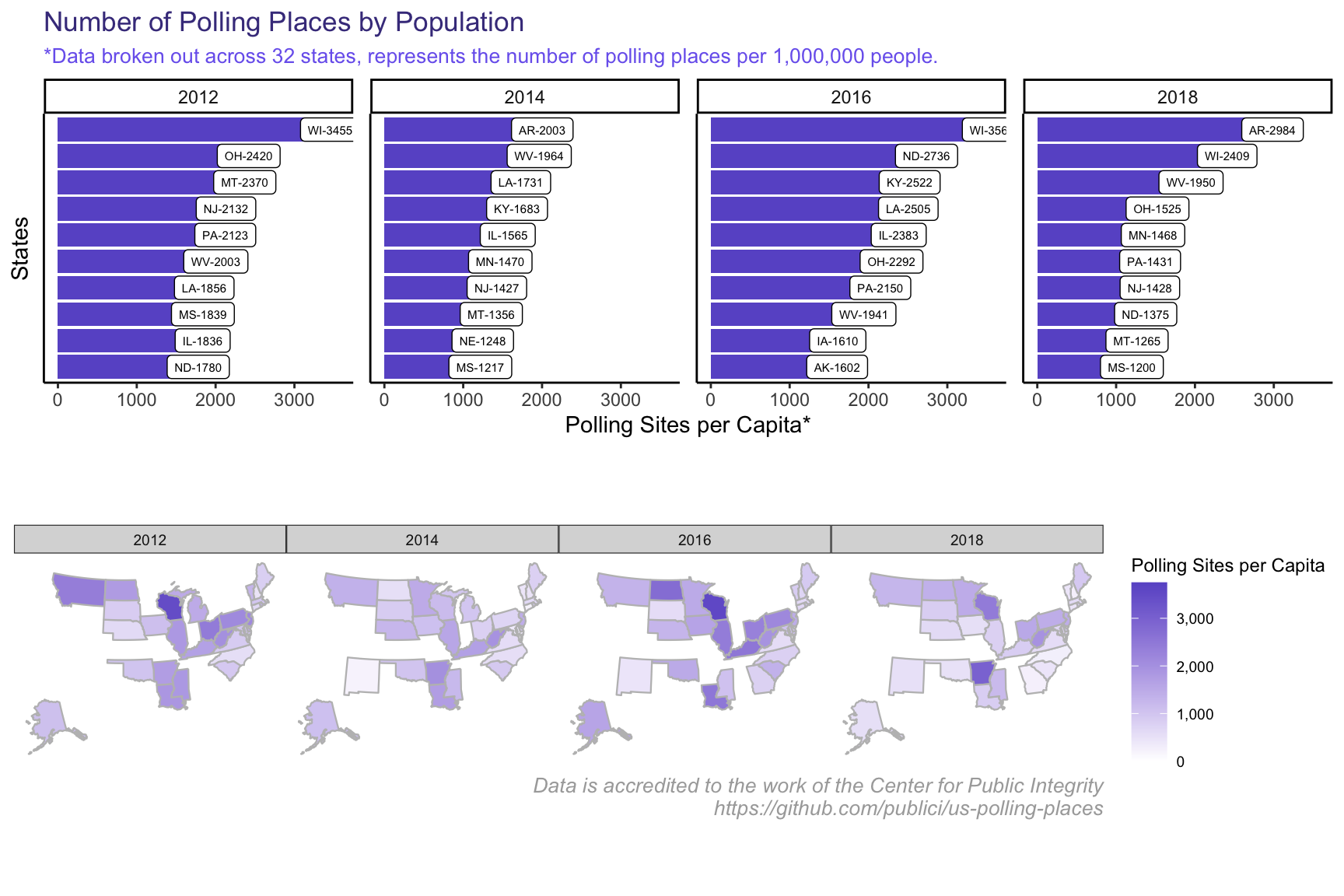 Above I’ve stacked a bar chart showing the top 10 states by polling sites per capita on top of a map-based visualization showing the same. Although there isn’t much of a geographic differentiation in the number of polling sites per capita by state (it definitely hurts that CPI has only collected this data for 32 states), I do notice that the numbers aren’t skewed by Northeast vs. South, which would have been my initial assumption. It’s also clear that states commission more public polling sites during Presidential election years than off-cycle years.

In this next section, I’d like to leverage elections data to look at the relationship between the number of polling places in a state and which party won elections in that state. The elections data have been pulled from FEC.gov. In the data, I look at the breakdown, by party, of the House, Senate, and Presidential races and the total number of votes for each in every general election between 2012 and 2018, using that data to match onto the polling places data.

I’ll do so by determining a new variable defined by the overall races won by a political party in a given state. For example, if in New Jersey 2018, Democrats won the House and Senate races, Democrats controlled that election year in NJ. If in Wisconsin, a Republican (Trump) won the Presidential election in 2016, but Democrats overall won the House races, then it’s a “Split Ticket” state.

Let’s start by getting a sense of this new variable. Which party won each state in the past 4 elections? 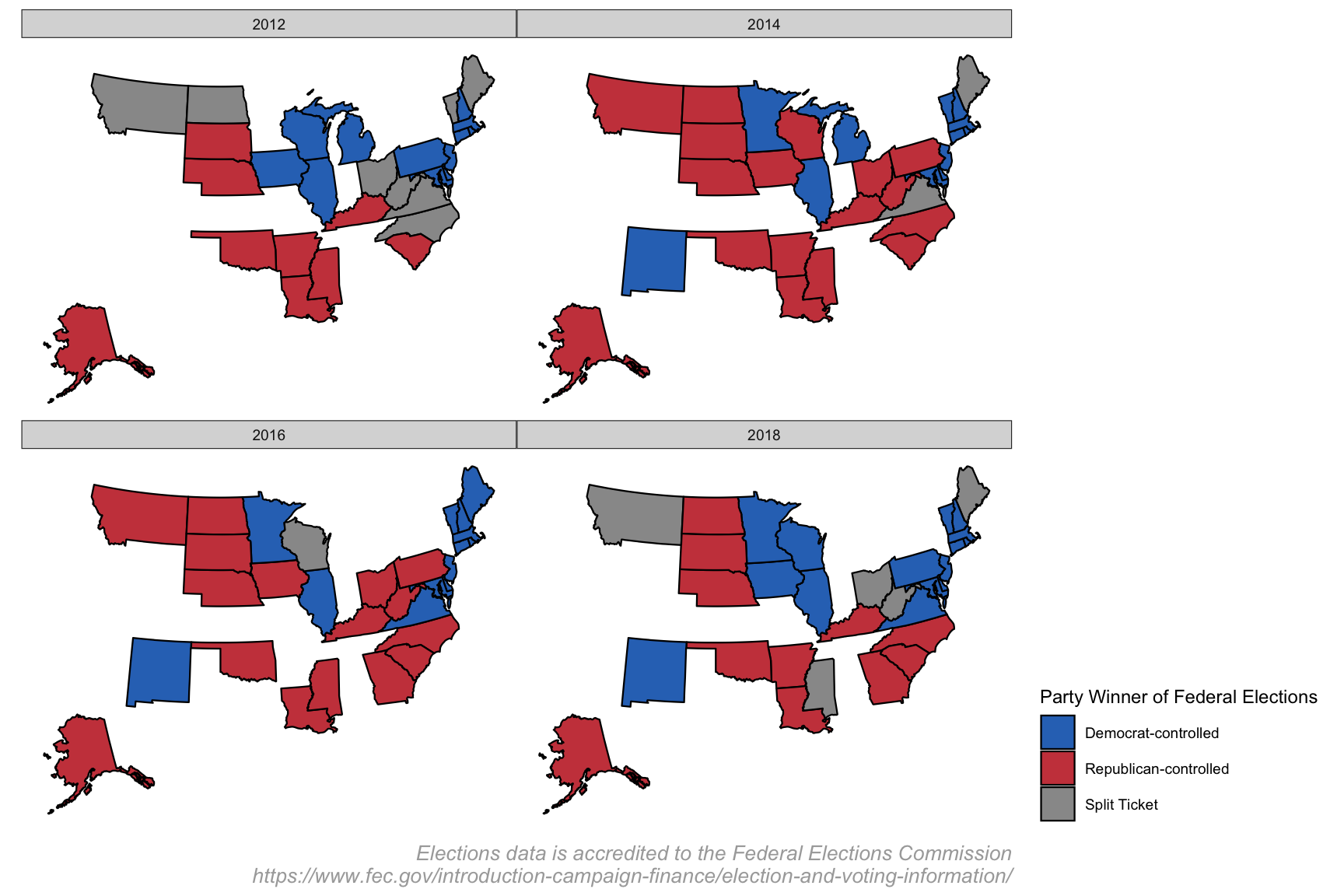 Now that we better understand how this variable works, let’s correlate this against the number of polling sites available to voters in that state. Now that we have our dataset, we’ll build 4 scatter plots (one for each year) of polling places by number of total votes. 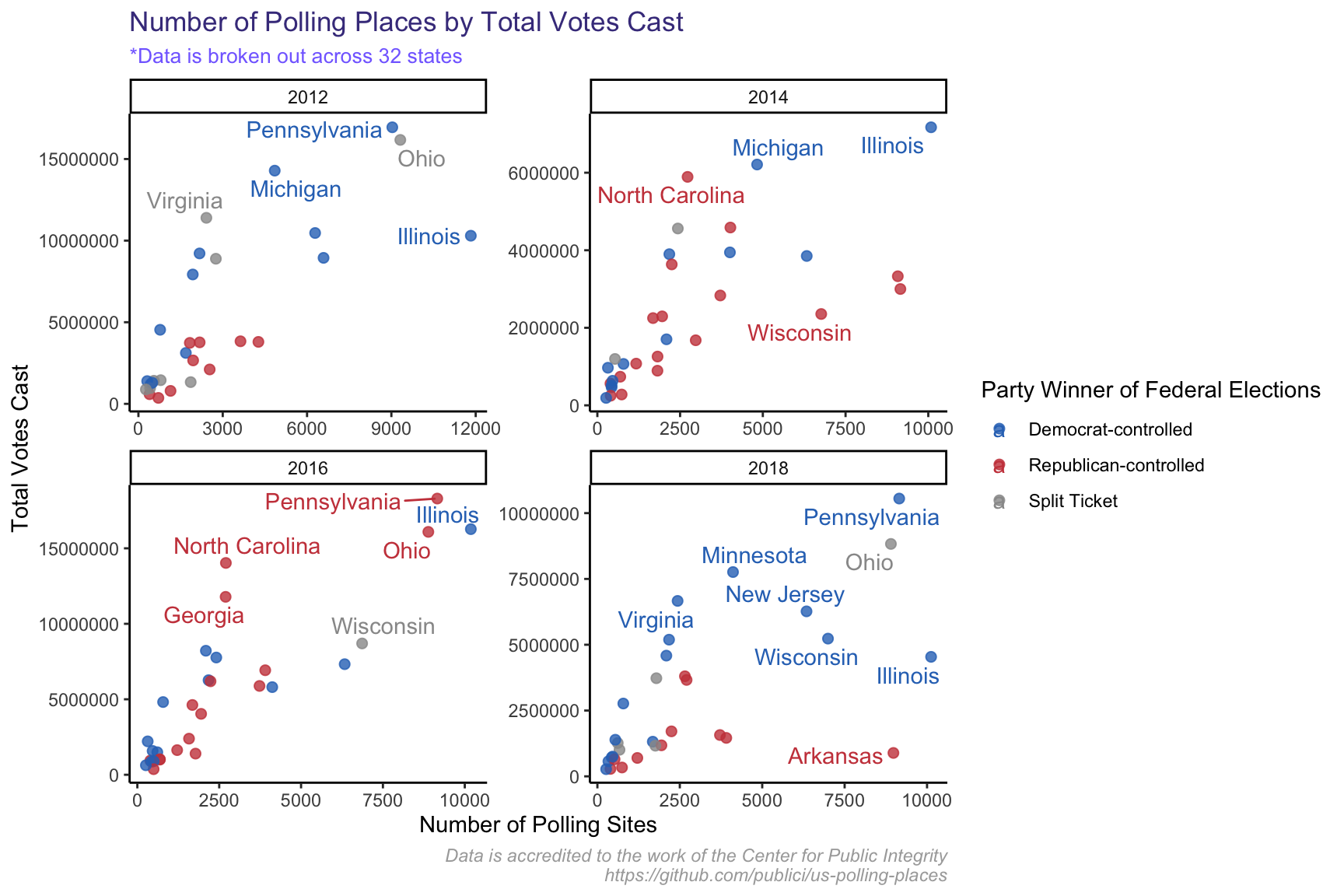 Let’s take another look at our top 10 counts from earlier to see if there’s a correlation with which party won a given state. 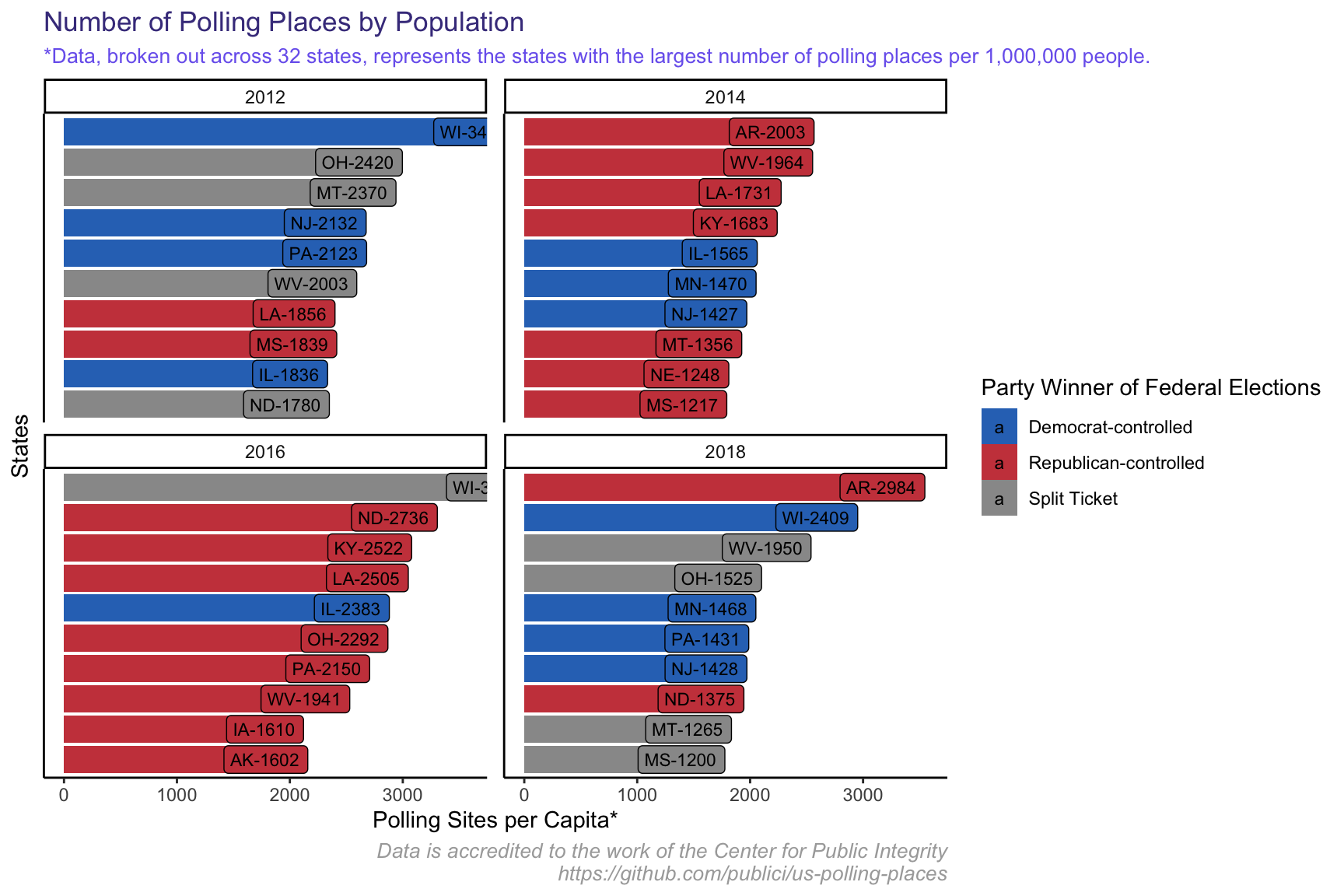 To be honest, this finding surprises me a bit, especially given a lot of the rhetoric that Republican states go out of their way to make it more difficult for individuals to vote. Obviously this doesn’t tell the full story. Just because there are more polling places does not mean that they are accessible, or that there are a lot of people eligible to vote (because of difficulties in the voter registration process). Still it is a metric that helps understand the fuller picture.

Let’s take a look at our “worst” 10 states to see if this trend reverses. 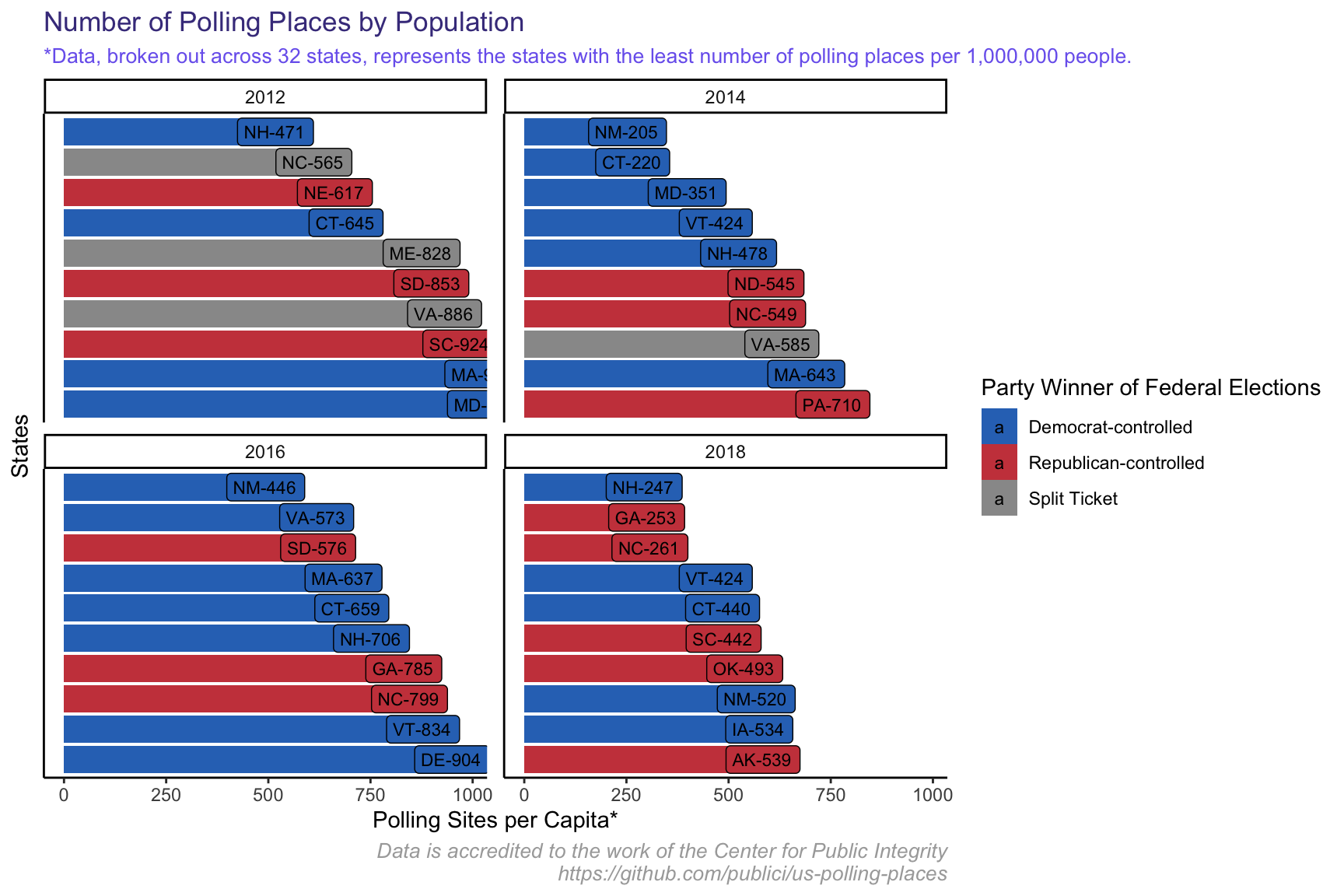 Looking at the bottom polling places makes the argument a bit more muddled. It’s overall a healthier mix of states that went full-Democrat and full-Republican (along with a fair share that had mixed results). 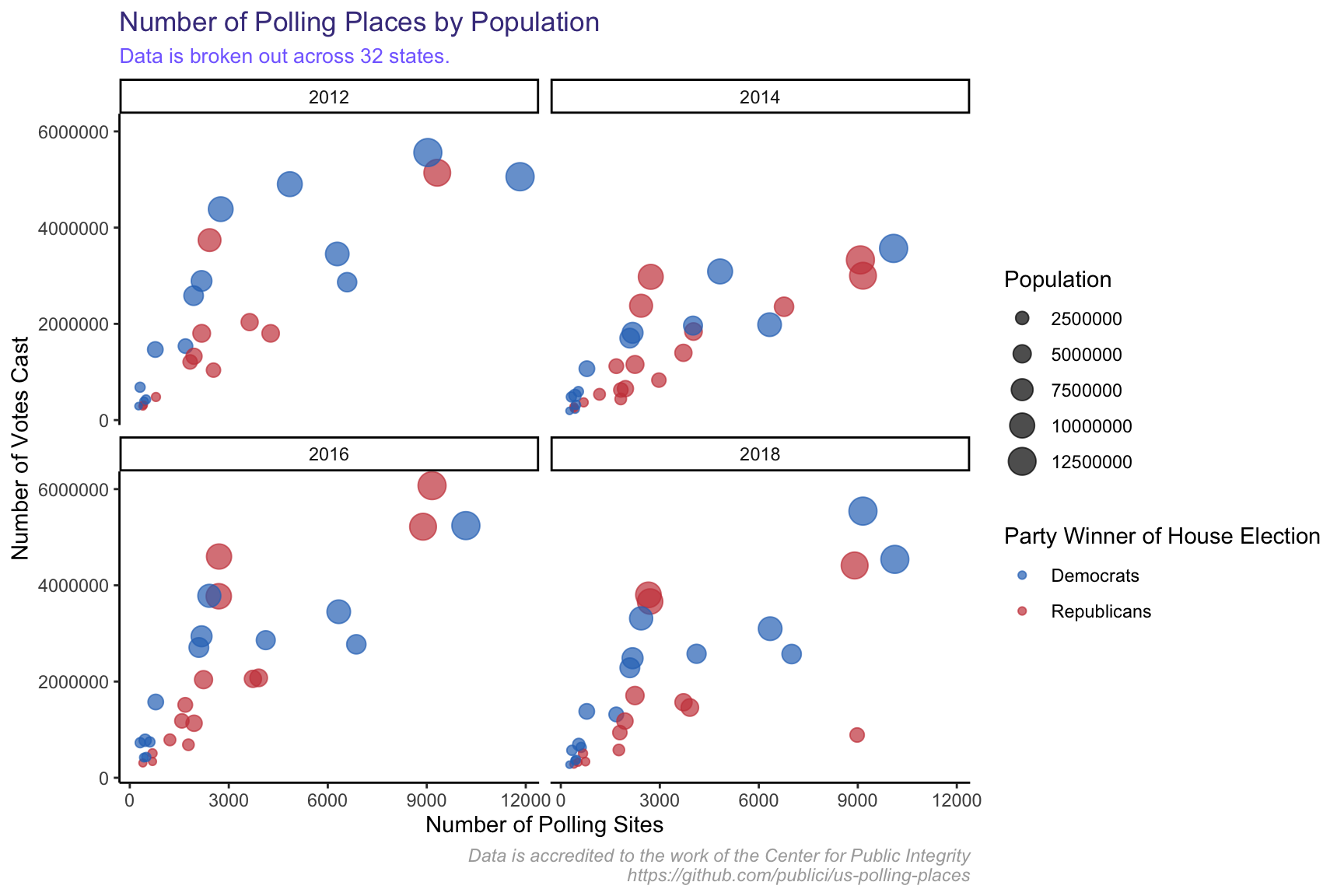 In terms of trend, I can’t see much distinction between states where Republicans won the House versus Democrats. Let’s test this formally using regression. In particular, let’s fit a regression model for House elections, using party, number of votes cast, and population as predictors. We expect, based on the plot above, to see highly correlative relationships between number of votes cast, population, and number of polling places. The real question lies in party.

Here are the results from running a basic regression:

Looking at the model summary, there are a few interesting things to point out about trends in the number of polling sites in a given state.

This article really is just a small look at one facet of elections: polling places. Where else should this article go? Well, if I could get my hands on elections data smaller at the county-level or even more granular, I could run a lot of the previous analyses on a much more robust dataset. Unfortunately, that data is expensive.

Otherwise, a good route for this analysis would be to compare the availability of polling places with demographic data on a zip code or county level. The hypothesis here would be that white Americans have better (i.e. more) access to polling places.

Where else should I go with this? Leave your thoughts in the comments.