With all of the factors to consider when designing a bike, there are no clear boundaries between these categories. For example, one brand’s Downcountry bike could be what another brand considers a Trail bike. The popular mountain biking website PinkBike has done in-depth analyses of many bikes across all categories, and covered the topics of which category bikes should be classified as and of how many categories is sufficient, as seen in the video here.

The goal of this analysis is to determine how many, if any, discrete categories should exist for mountain bikes. Since most specifications and geometric measurements have one direction when moving across the spectrum of bikes, it’s reasonable to believe that these measurements could be reduced to much fewer dimensions, and perhaps even one continuous principle component rather than discrete categories. We can also cluster the bikes together based on some of these specifications and geometric measurements.

As an example, here is a diagram of some of the different types of geometric specifications on mountain bikes: 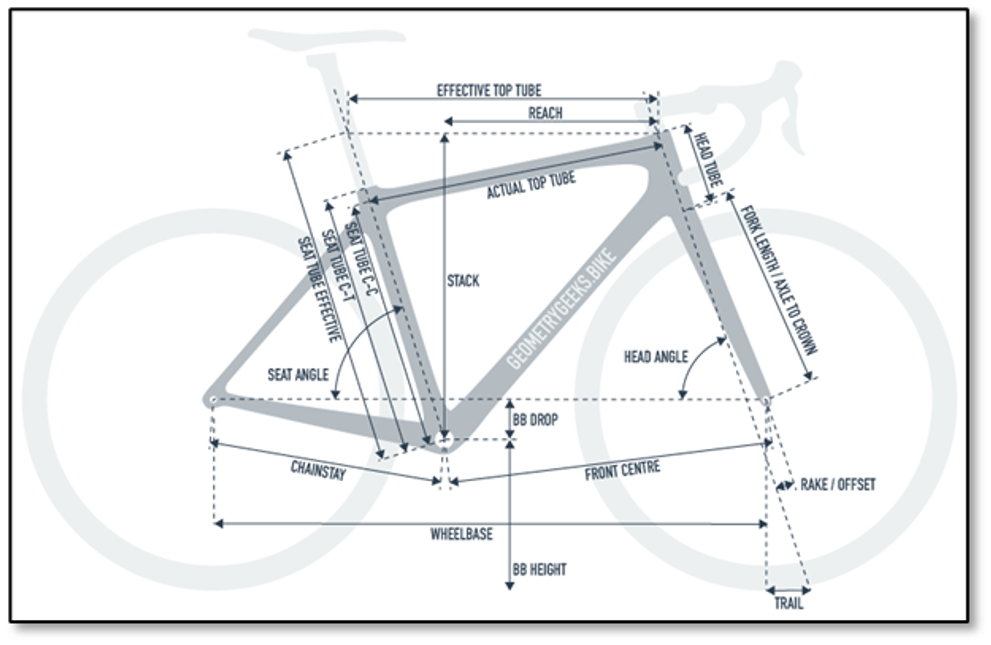 The data was retrieved manually from each of the mountain bike company’s websites. All data and associated code for this analysis is available at the team’s corresponding GitHub repository. Let’s take a look at the data.

In this section, we’ll take a look at the 74 mountain bikes in our dataset and some of the 27 features. We’ll try to break down our understanding of the data in terms of label, our target variable that acts as the category for each mountain bike.

As stated earlier, there are 5 mountain bike categories in our dataset:

Let’s look at how many of each we have in our dataset. 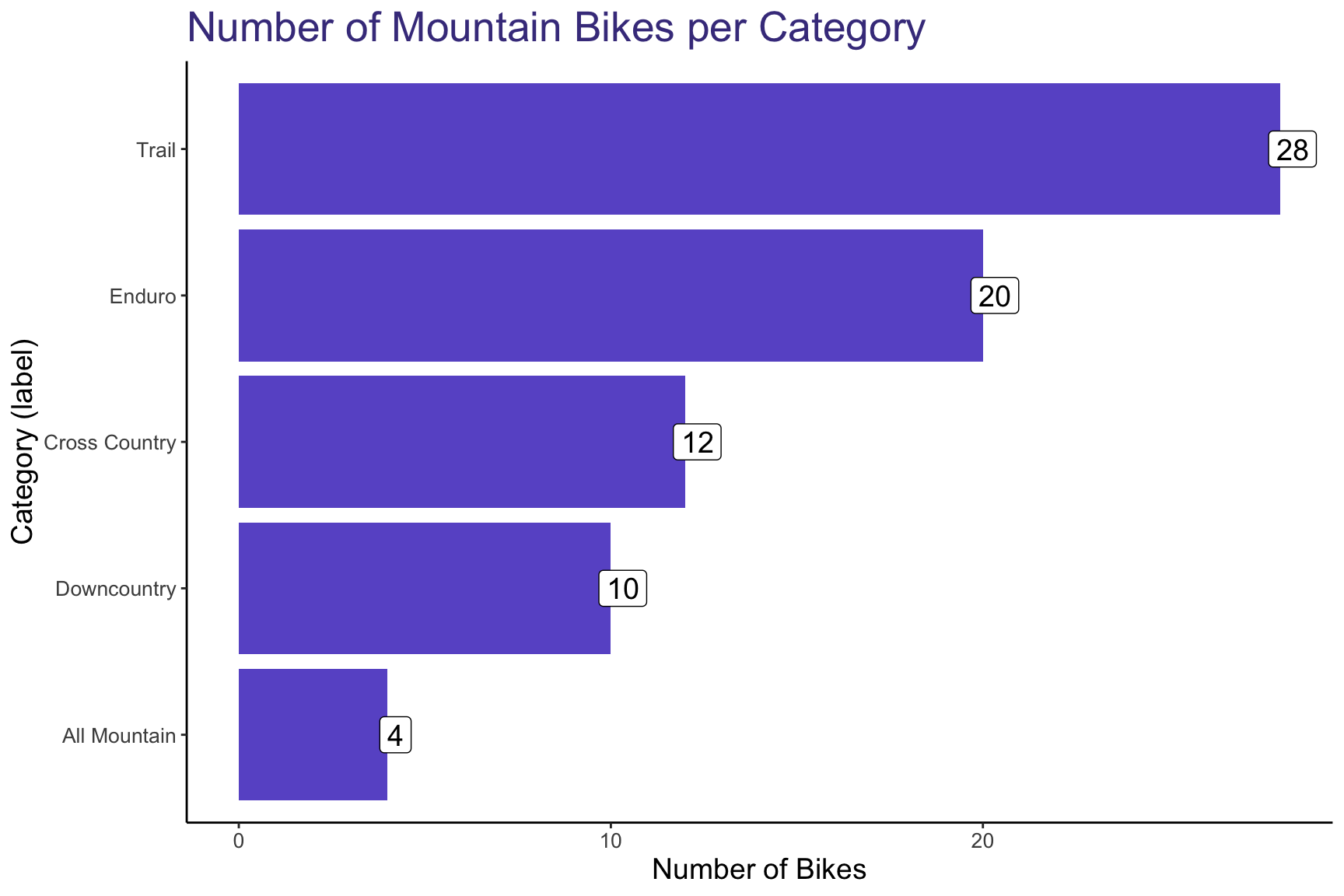 We see that out of our 74 bikes, most of them are Trail bikes, with the smallest grouping of bikes being All Mountain bikes.

There are 4 categorical variables we’ll take a look at to better understand our data: 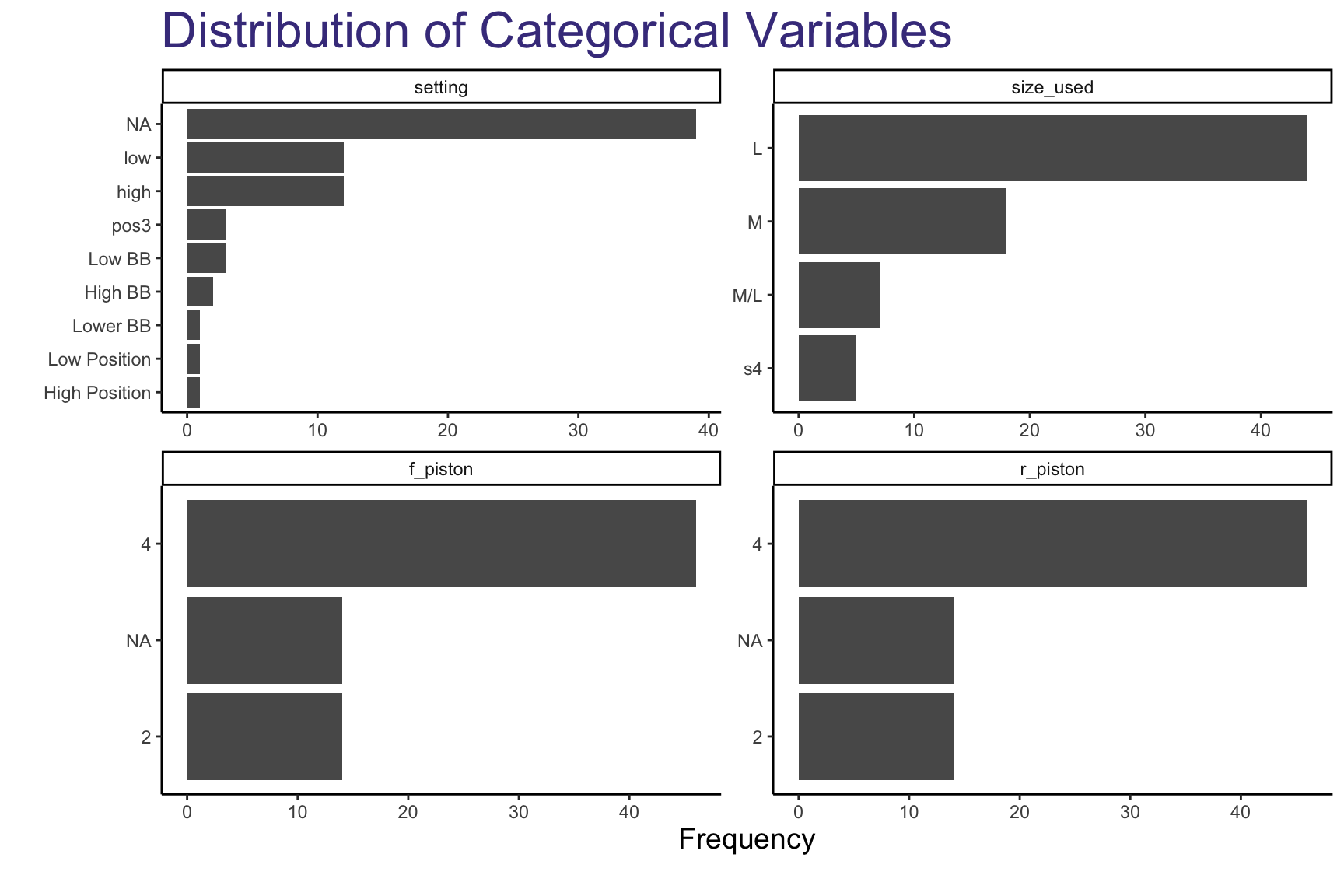 But, really, we care about understanding how these different variables interact with our target variable, label. Let’s look at their distribution and look for any patterns. 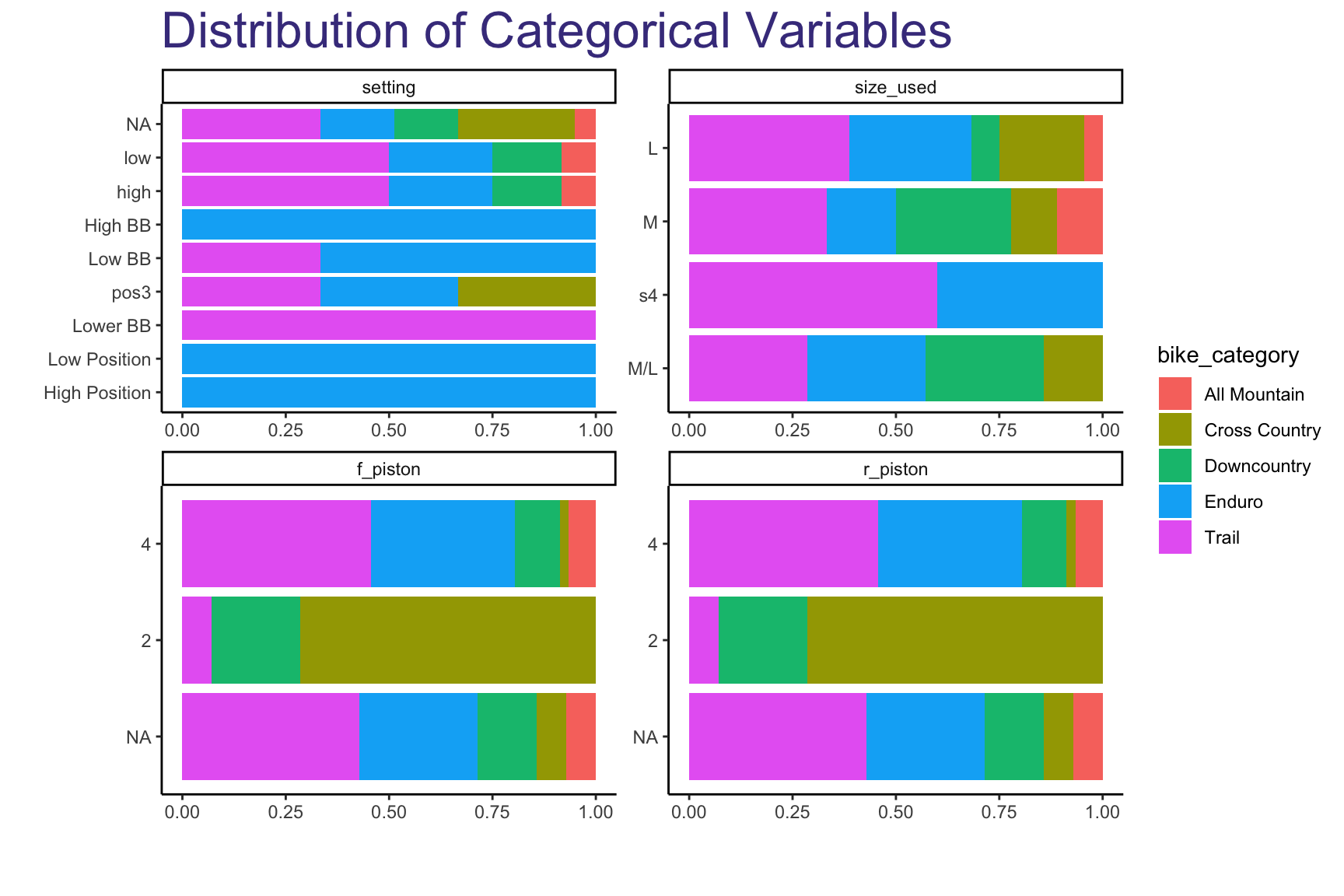 To analyze the continuous features within our dataset, we built density plots for each of them to better understand their distribution. 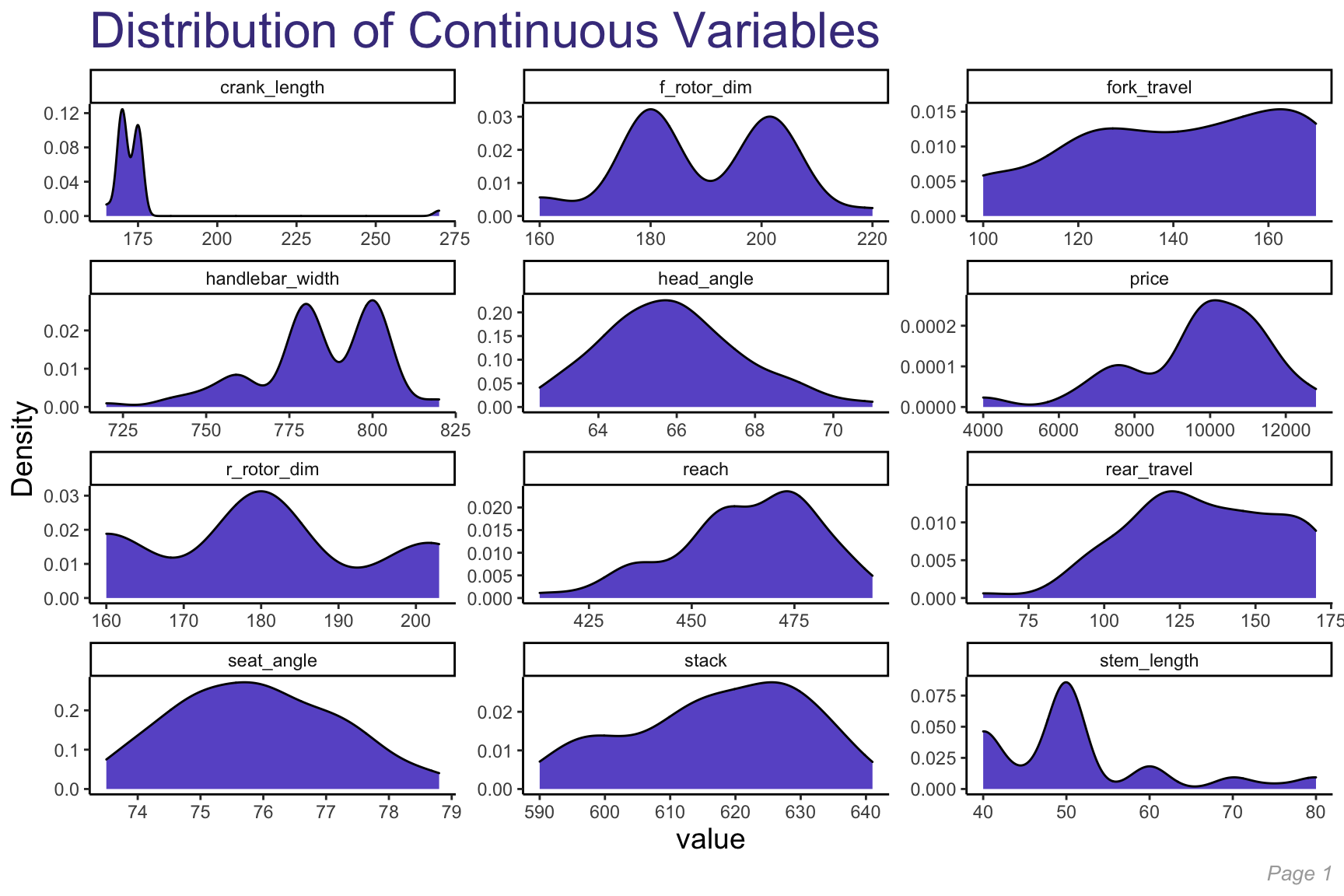 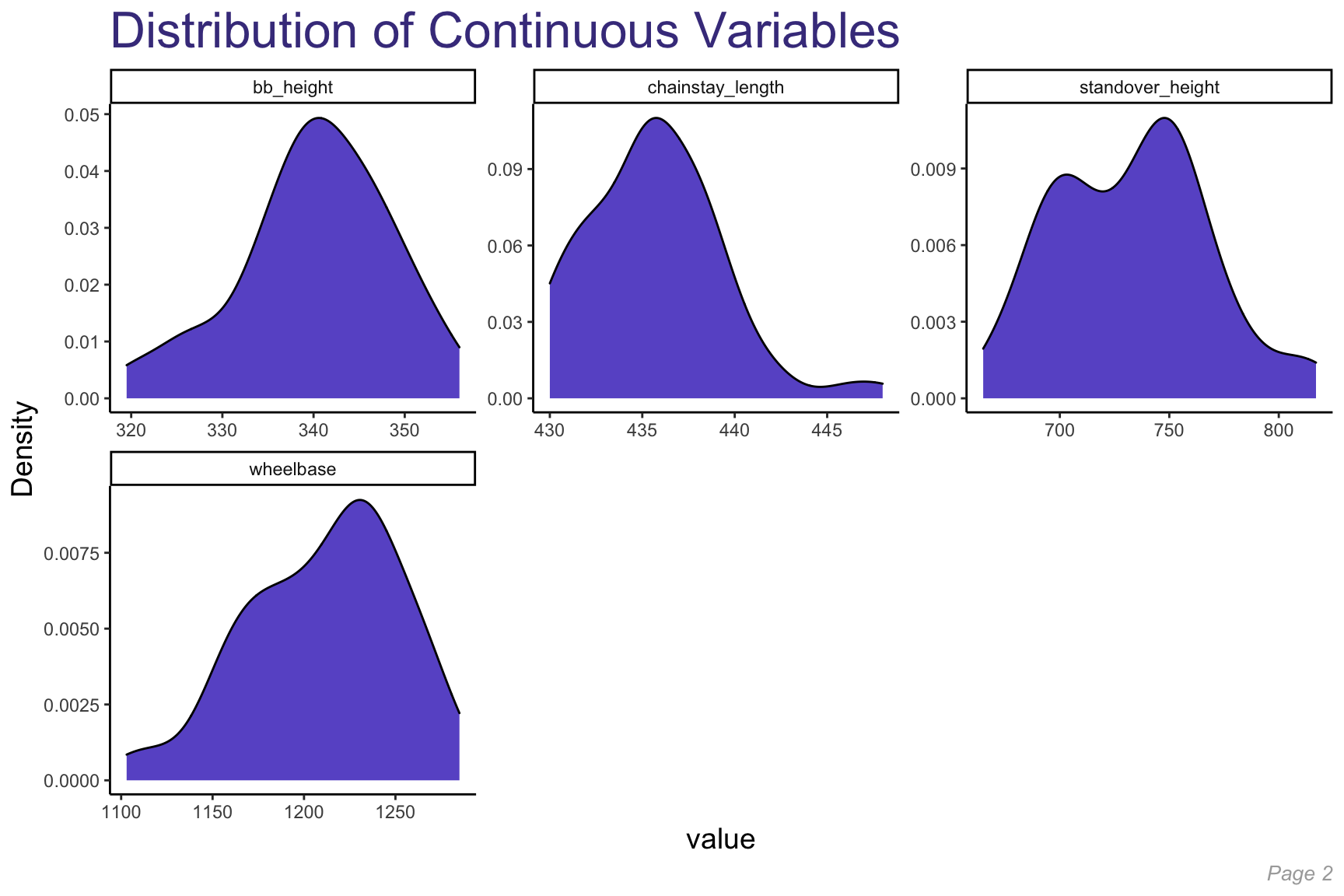 Like we did for continuous variables, let’s look at the distribution of each of these predictors by our target variable, label, to look for any discernible patterns. 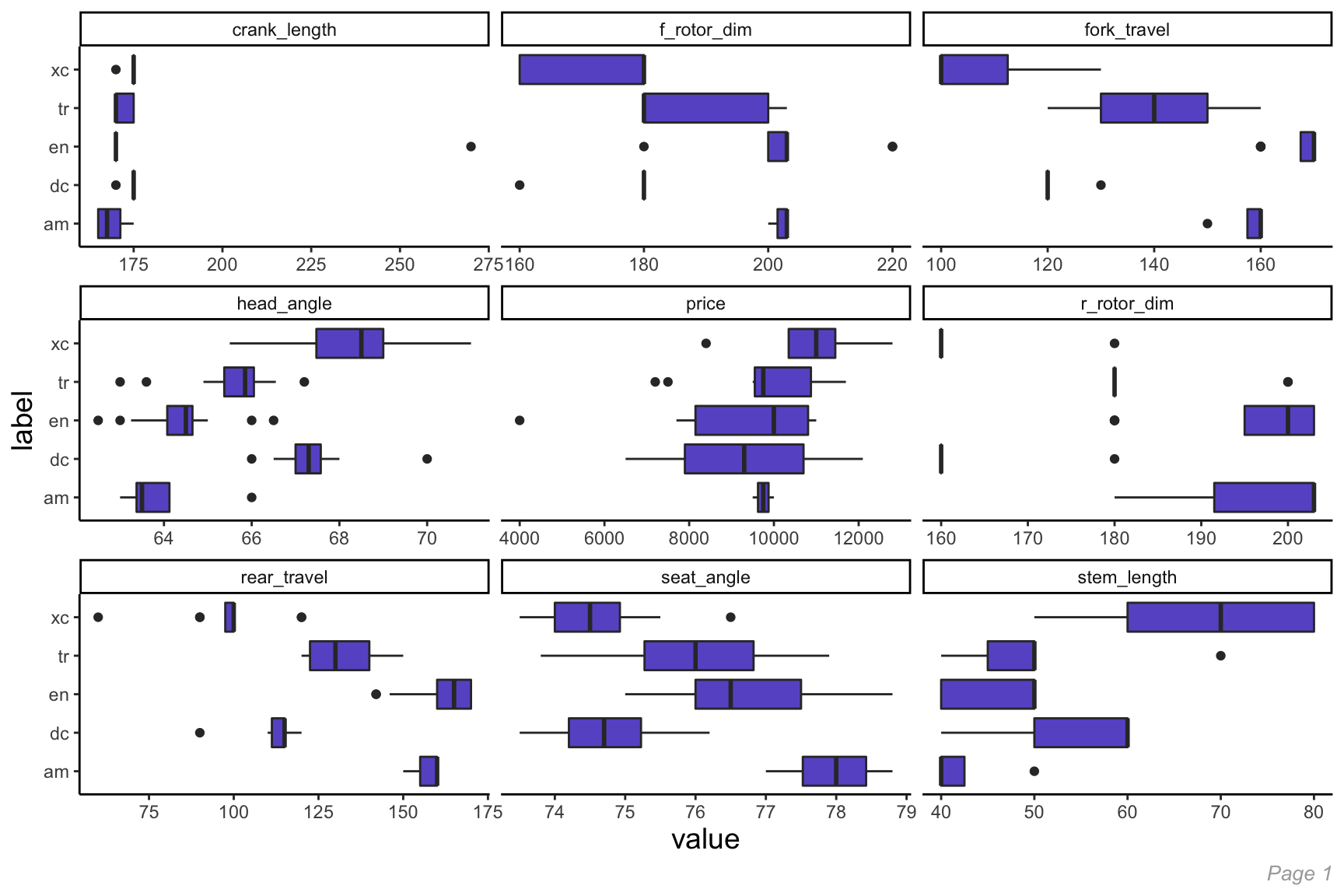 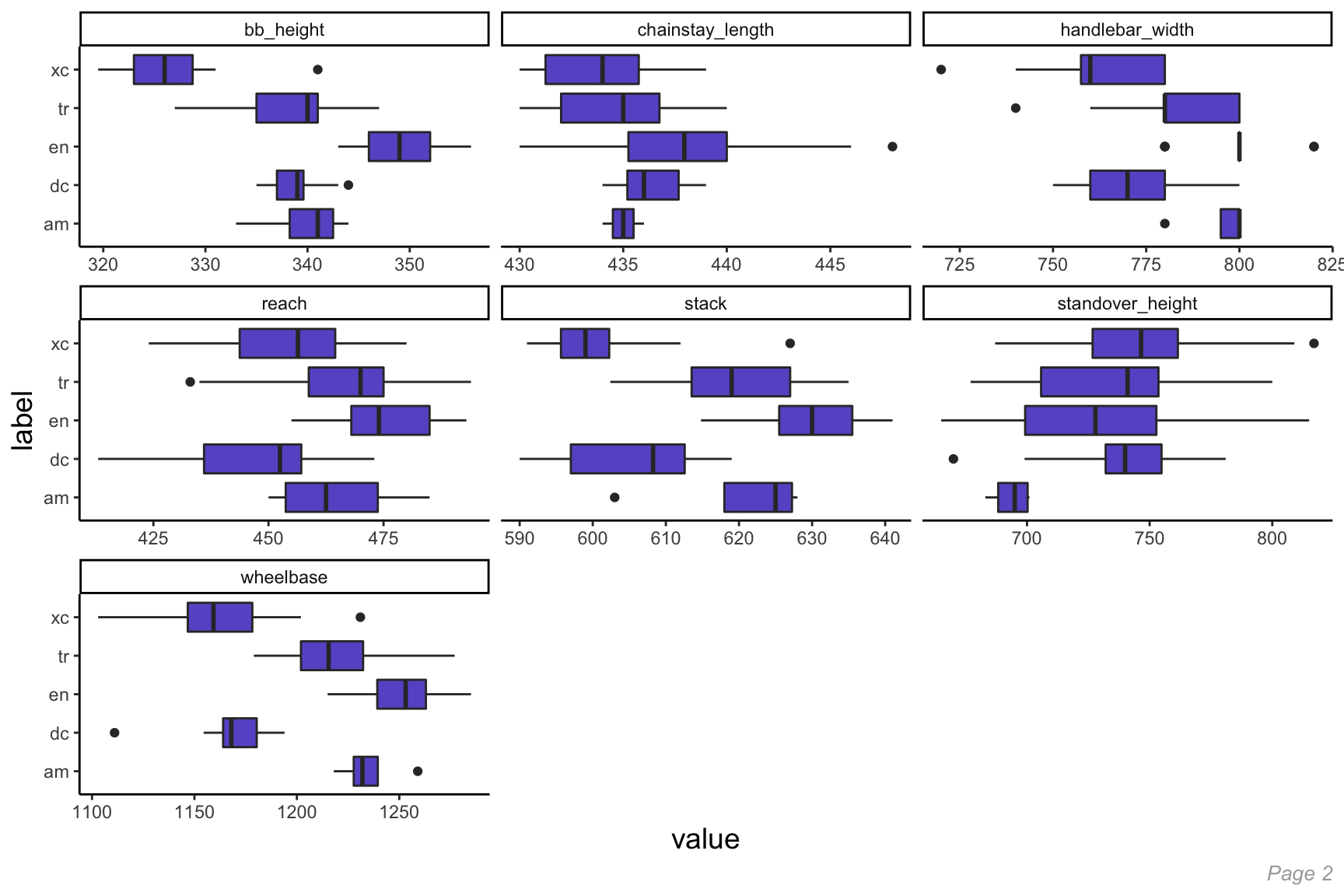 Because some bikes’ websites would have two different “settings” for the same-sized bike, we opted to include both options and average the two together to get one middle-of-the-road estimate for that type of bike. We end up performing this operation for 47% of the bikes in our dataset.

Now that we have a better understanding of our mountain bike dataset, we’ll formulate a plan to prove the following hypothesis:

The first thing we’ll do is look to see if any of the features in our dataset are better at explaining the variation amongst the different bikes than other features. That is, it’s completely possible that two features are similar and don’t have much variation in them, even across some of the different bike categories. To do so, we’ll: 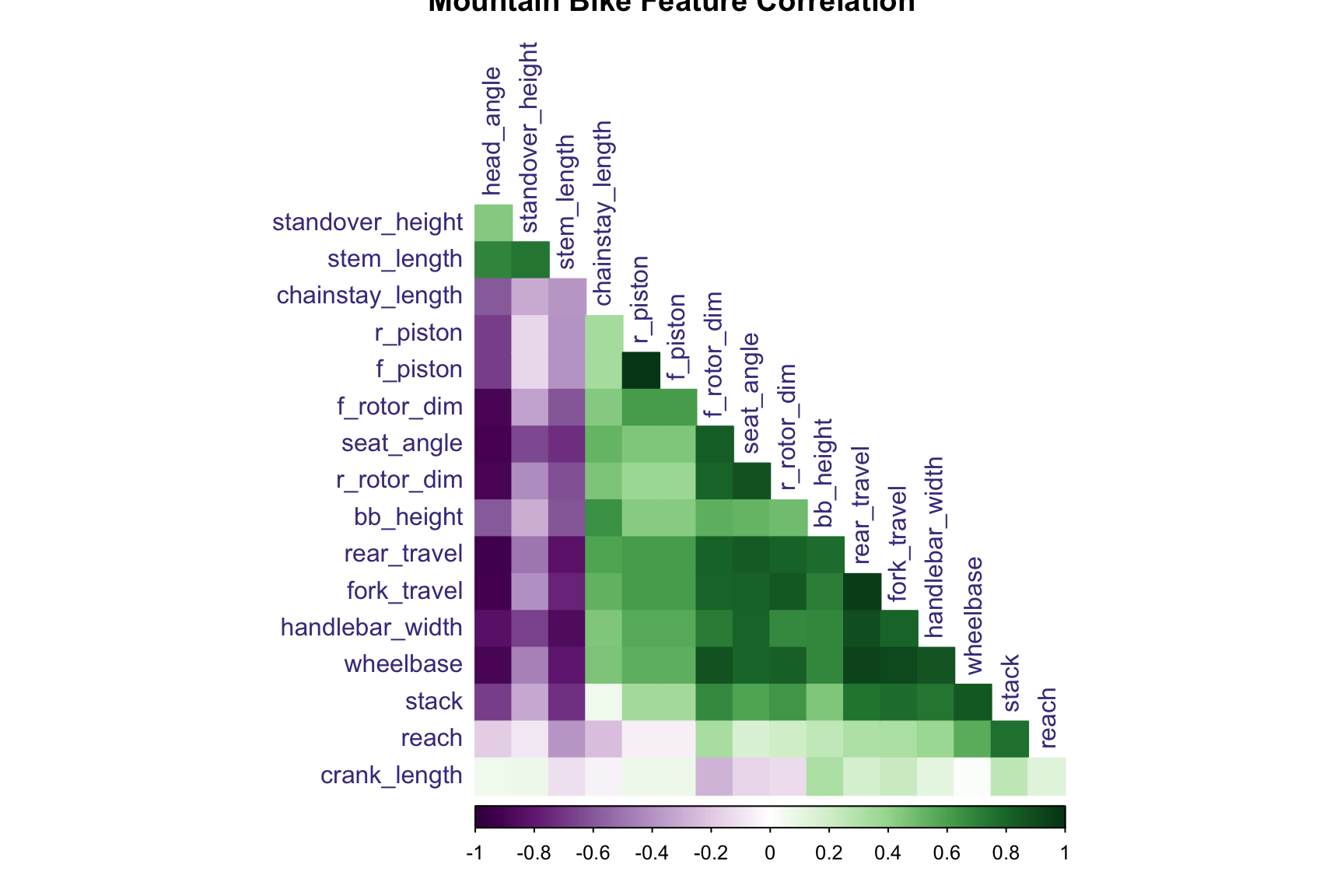 Here we see some obvious correlations, for example:

In all, here are the most highly correlated variables (i.e. variables which have a correlation above .9 or below -.9):

There are a solid amount, especially given that we only have 18 continuous columns in our dataset! For now, we’ll opt to include everything. But later on, as we analyze the importance of different features, we’ll look to remove some of the above variables first.

Next, we’ll apply PCA to our dataset. In so doing, we’ll have to center and scale our data given how different the ranges are for certain measurements. Let’s take a look at our 5 principal components which explain the largest proportion of variance in the data: 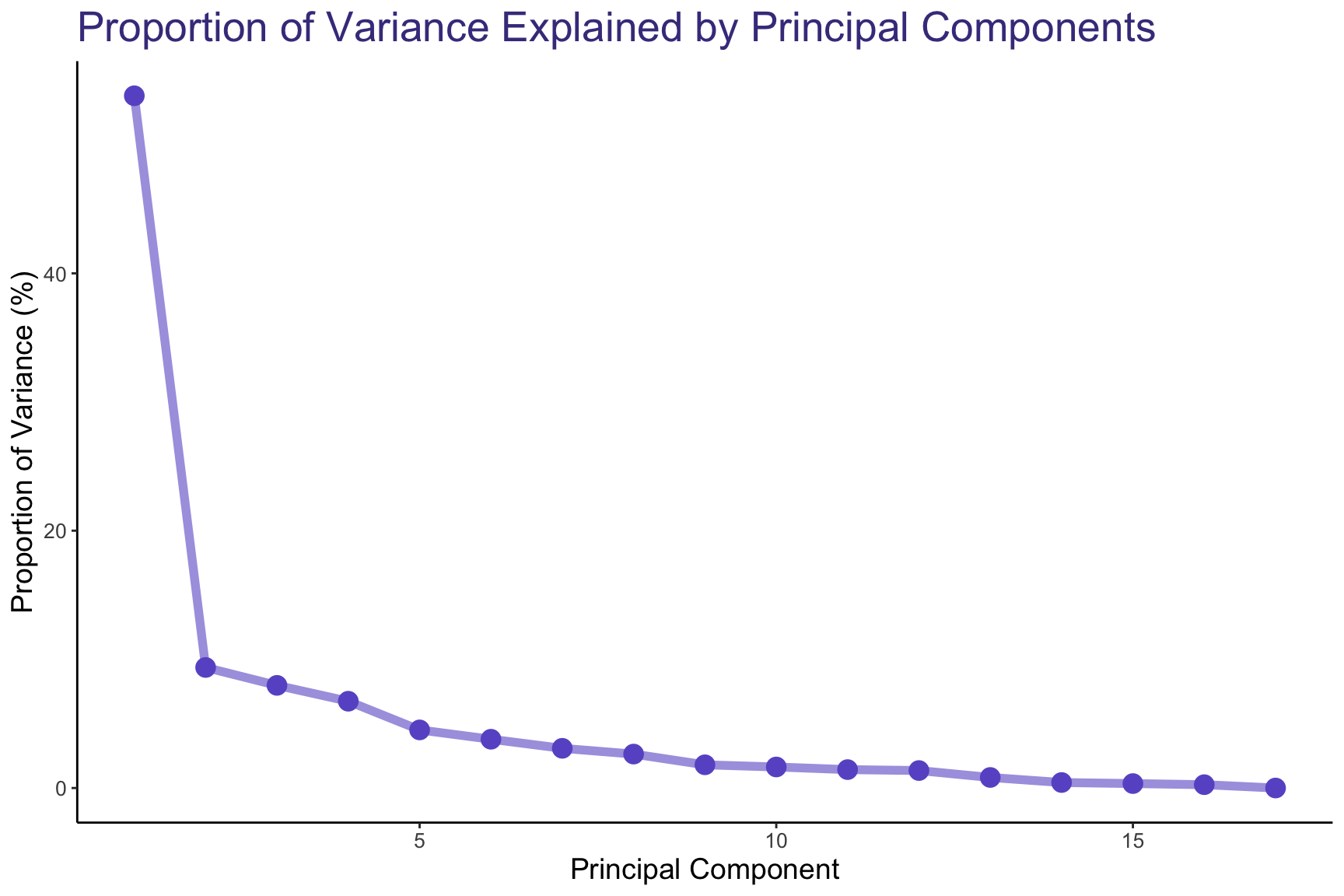 Let’s take a look at how our top 2 principal components explain the 5 different mountain bike categories: 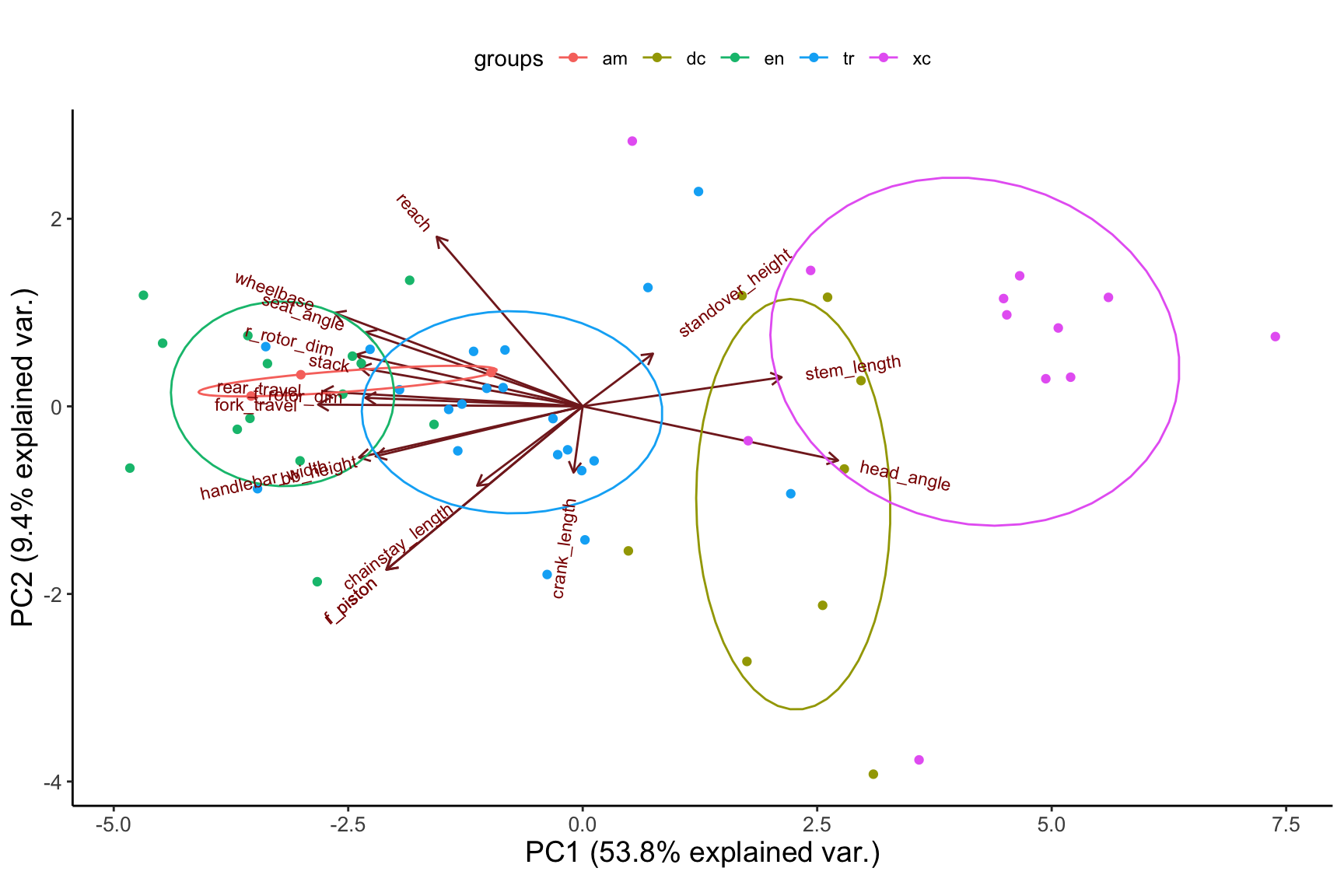 Here we can see that our top 2 principal components, which explain roughly 63.2% of the variation in our data, are already pretty good representations for describing the different components in our dataset. Even so, the groupings are distinctly plotted on the 2-D graph and it is pretty easy to see how the different bike categories (denoted by color) can be explained using a linear transformation of our existing data.

Because we are investigating the validity of mountain bike categories, one approach is to treat this dataset as unsupervised, stripping the bikes of their label and seeing if various clustering algorithms can re-create the 5 distinct labels. To do so, we’ll take a look at the following algorithms:

We’ll start by using the K-Means Clustering algorithm, looking at various numbers of clusters (k) and seeing if the bikes logically group together. 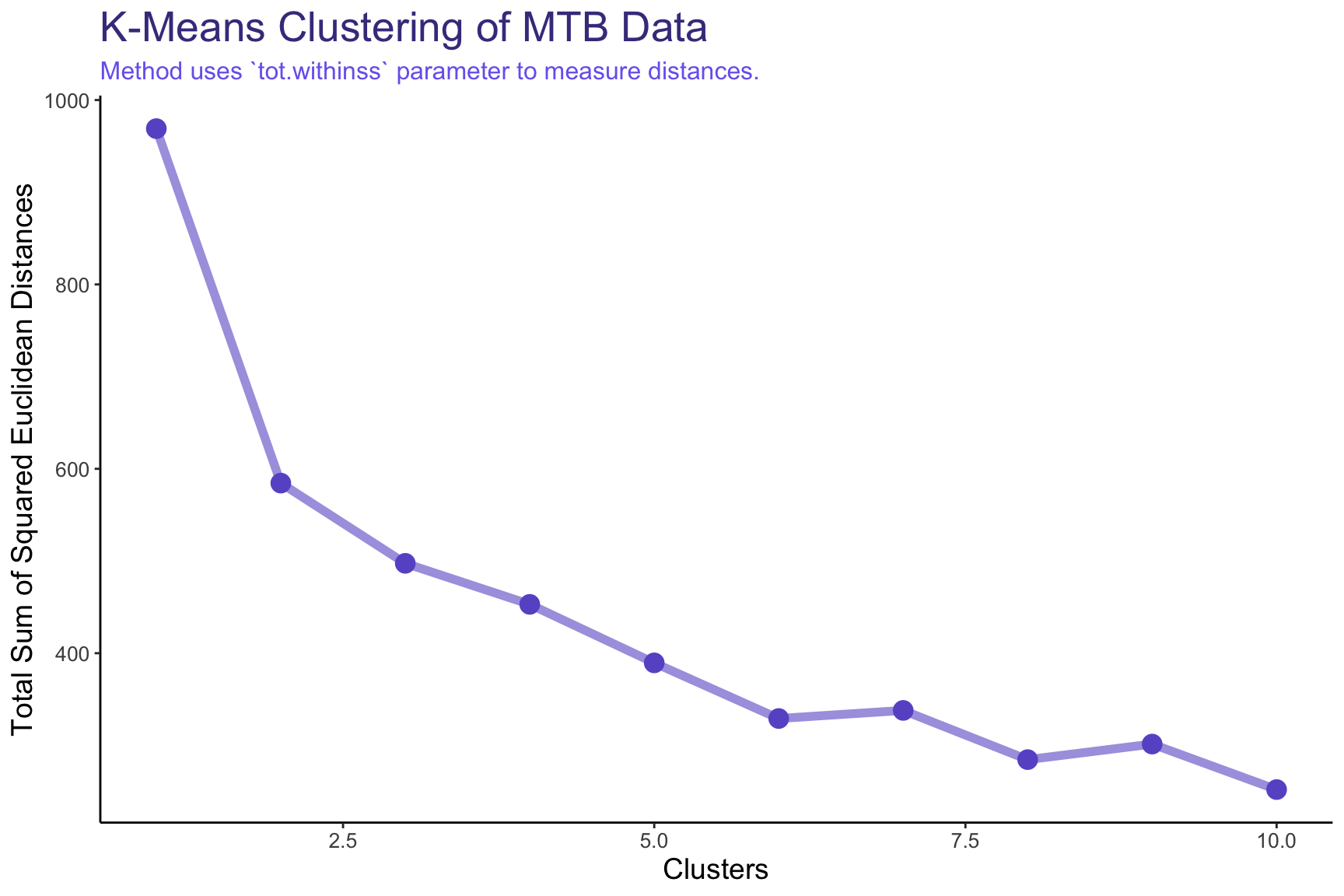 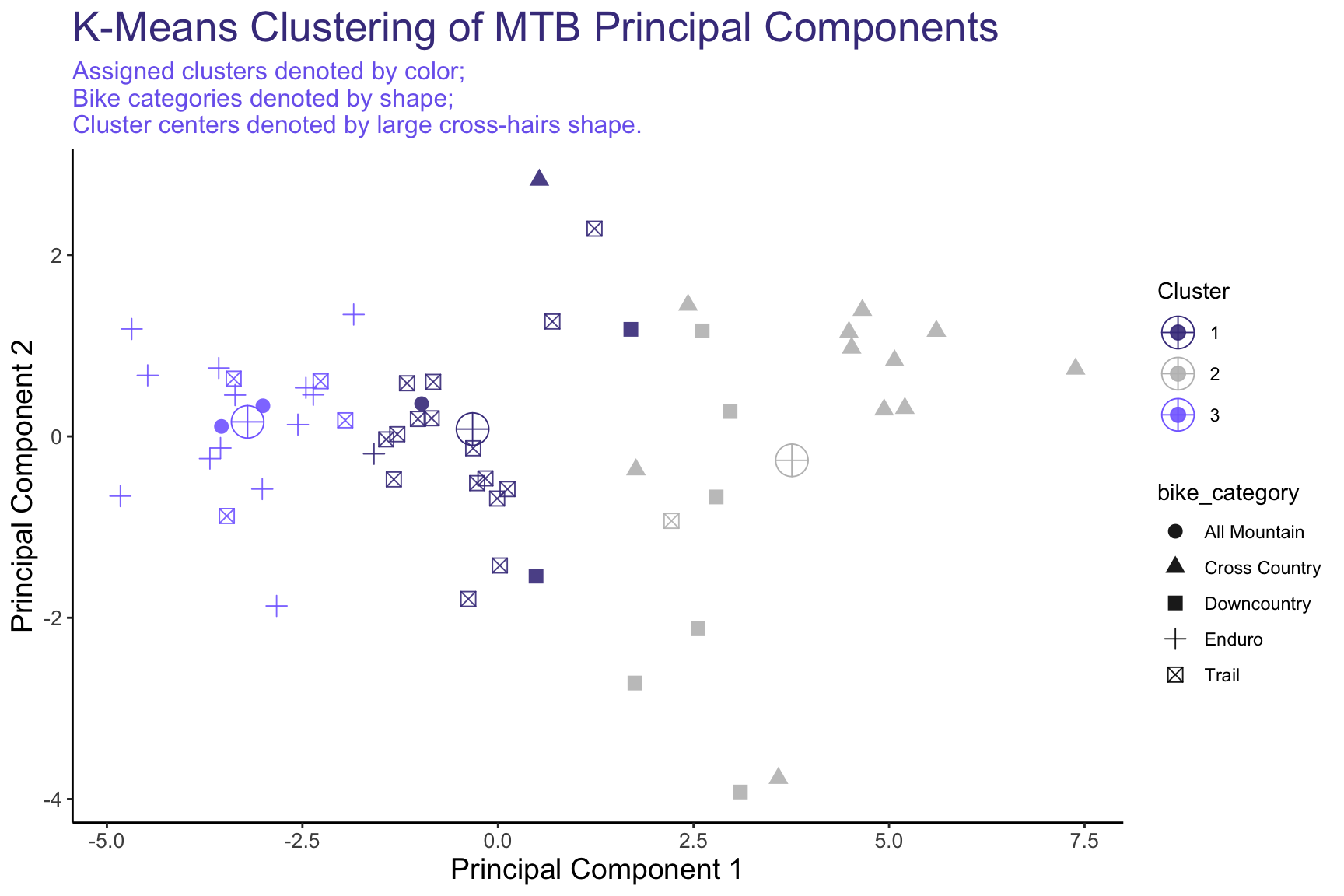 Overall, it’s clear that there is significant overlap between our Clusters, mainly along the Principal Component 1 axis; lending credence to the notion that our bikes can be differentiated along a single, continuous scale.

Note: In the bottom-right of the graph (PC2 < -4), we see two Niner bikes, almost acting as outliers. For a 5’10” rider Niner suggests a size Medium, which results in low reach numbers on its bikes. From the earlier PCA plot, we see that Reach heavily corresponds with PC2, and thus these bikes appear lower on the visual.

Generally, what we expect to see is something like the following: 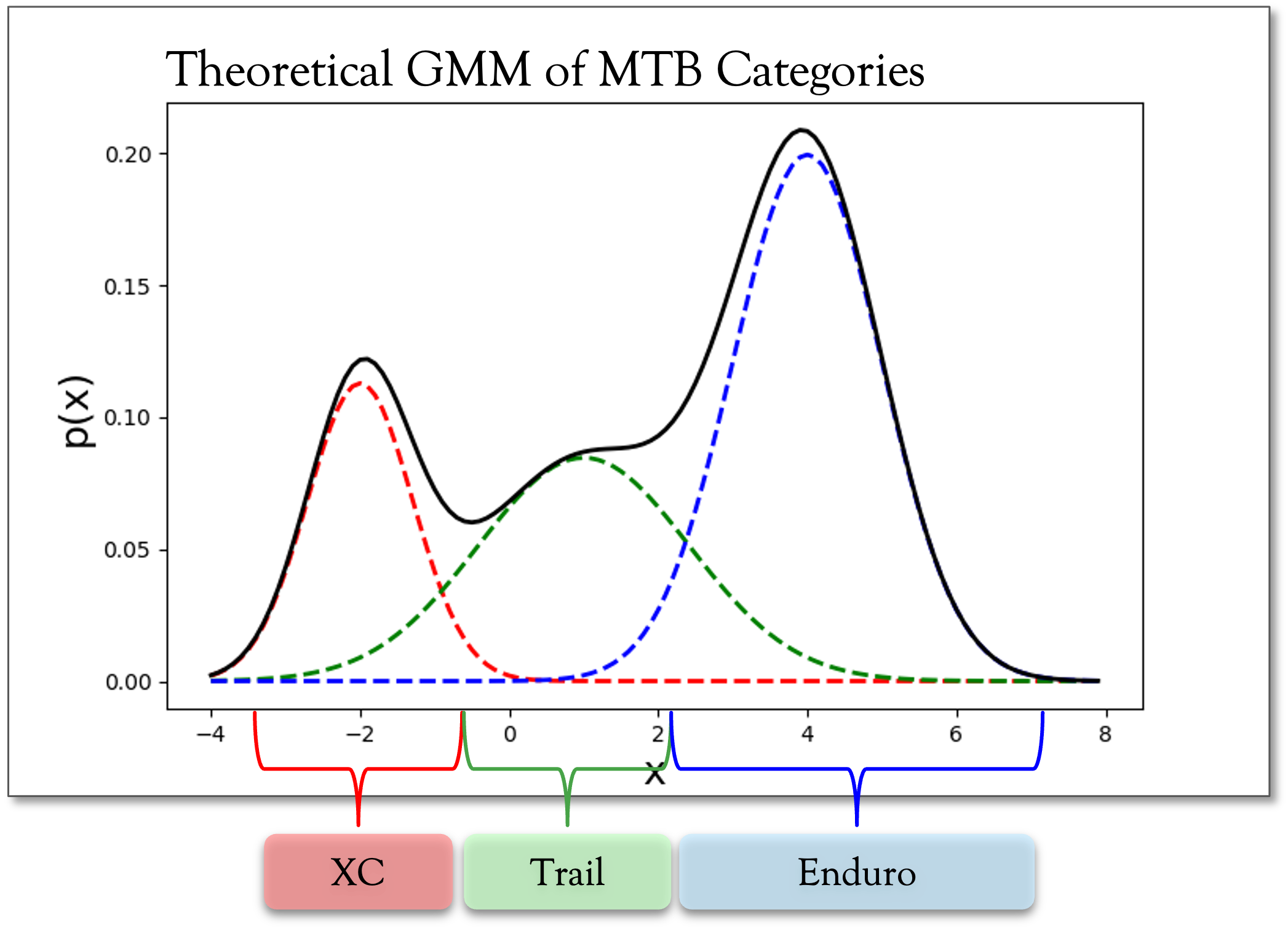 where, given a specific type of bike, we can predict the probability, \(p(x)\) that a bike belongs to a category like Cross Country (xc) vs. Trail vs. Enduro. 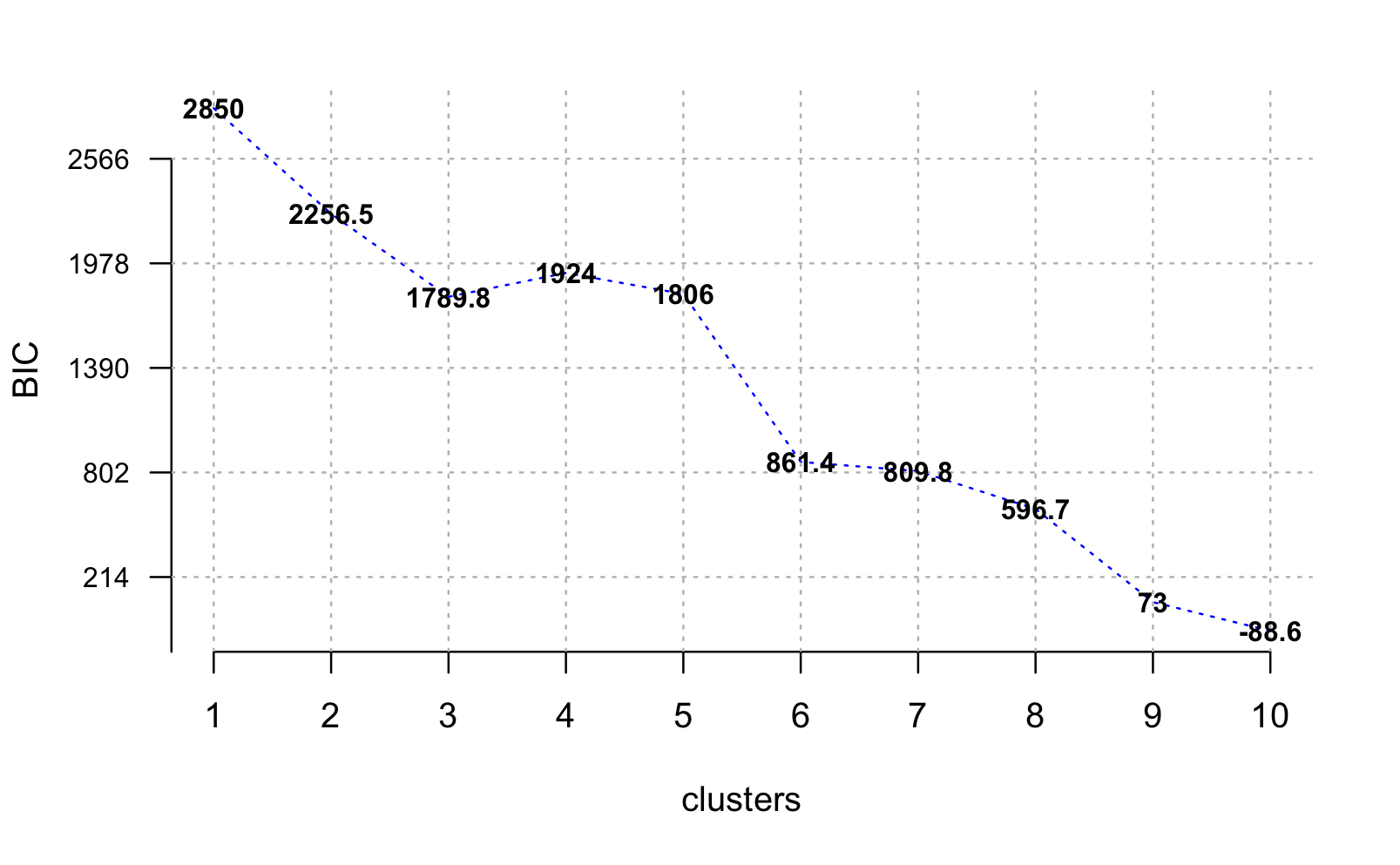 From the plot above, we see that the BIC value decreases generally as the number of clusters increases. However, it appears that the first big drop is when clusters = 3. Let’s try that value out and see which bike categories get mapped into each of the 3 clusters. 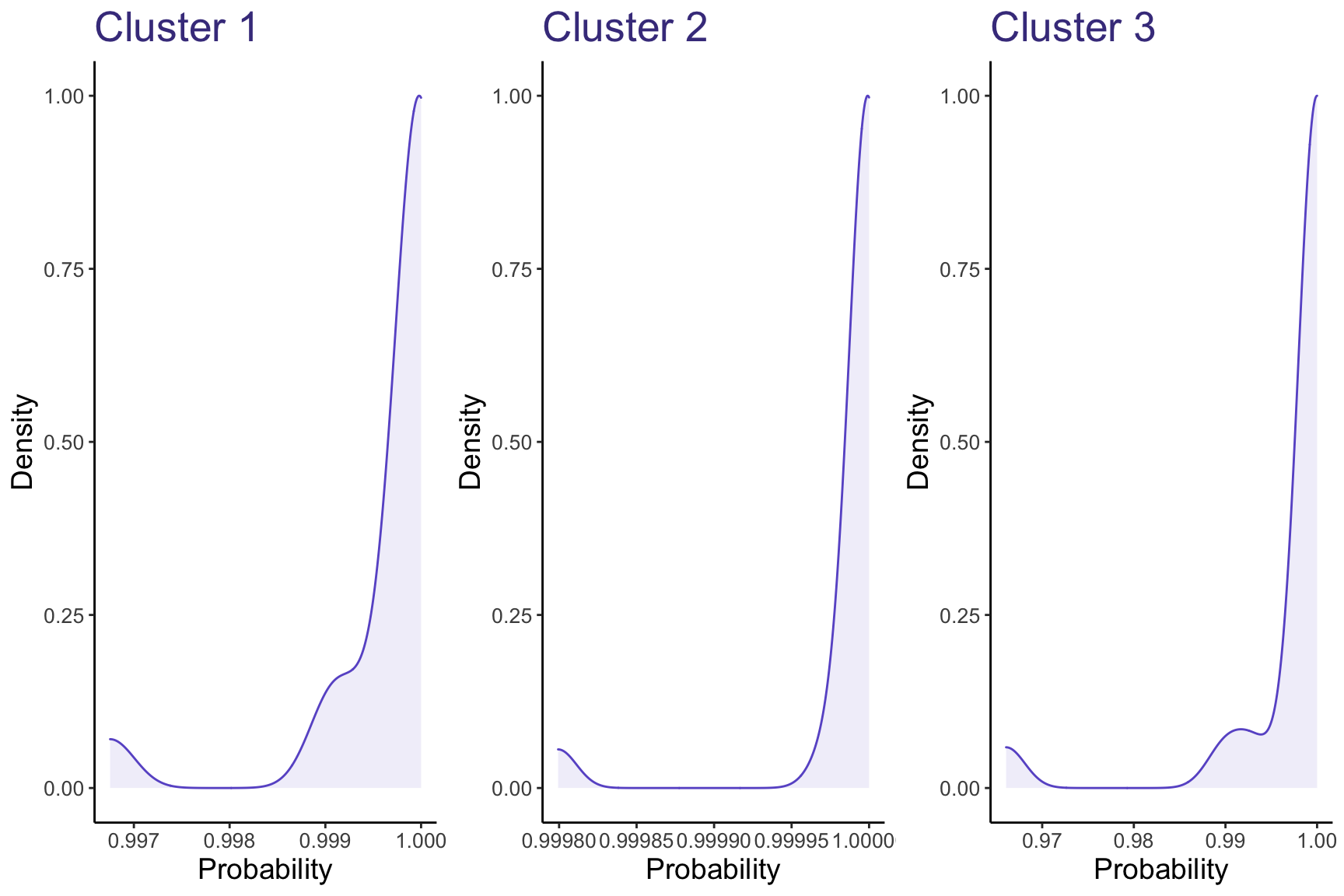 Above, we see the expected probability associated with predicting a correct class label. That is, the graph on the left shows how accurate the 3-cluster Gaussian Mixture Model was for predicting bikes fitting into Cluster #1. Generally, the probabilities for the predictions are all above .95; that is, GMM is extremely confident in grouping the different bikes into these 3 clusters.

The next logical “elbow” in the BIC chart from earlier is at 6 clusters. For demonstrative purposes, let’s show what this looks like as well.

Here we see the 6 predicted cluster labels along with the actual 5 bike categories in our data. There is some cleaner separability here than what we saw earlier. For example, cluster 2 consists only of 2 Enduro bikes and cluster 5 consists only of Cross Country bikes. However, Enduro bikes feature prominently in a mixed cluster 1; and Cross Country bikes feature slightly in clusters 4 and 6. Overall, I’d say that using 6 clusters obfuscates the groupings compared to using 3 clusters.

If we took a slightly different approach and opted to treat our pre-assigned labels as truth, then we could approach this analysis as a supervised learning problem.

For this section, we chose to group the All Mountain and Enduro categories, since they completely overlapped in the PCA chart earlier. We also chose to switch the categorization of the Downcountry category, leaving it as a separate category and grouping it with both Trail and XC to experiment with the results of the model.

We chose to use a Multi-Class Support Vector Machine (SVM), and a grid search to tune the kernel functions and \(\gamma\) values. For each set of parameters, we used 10-fold cross validation on all rows of the data. We decided against holding out data as a test set since we have such limited data, and the 10-fold CV should evaluate the model’s performance on blind data.

Treating the Downcountry category as Trail, the best model was 80.0% accurate with a Radial Basis kernel function with \(\gamma=3.764936\)

Logically, grouping Downcountry bikes with one of their adjacent categories should naturally lead to an increase in performance; however, this could suggest that the Downcountry category is slightly more skewed towards the XC bikes.

To visualize the results of the SVM classifier, we mapped all features to the 2 Principal Components. In so doing, we were able to achieve a higher accuracy of 75% using a linear kernel, while continuing to treat the Downcountry category as its own distinct category. 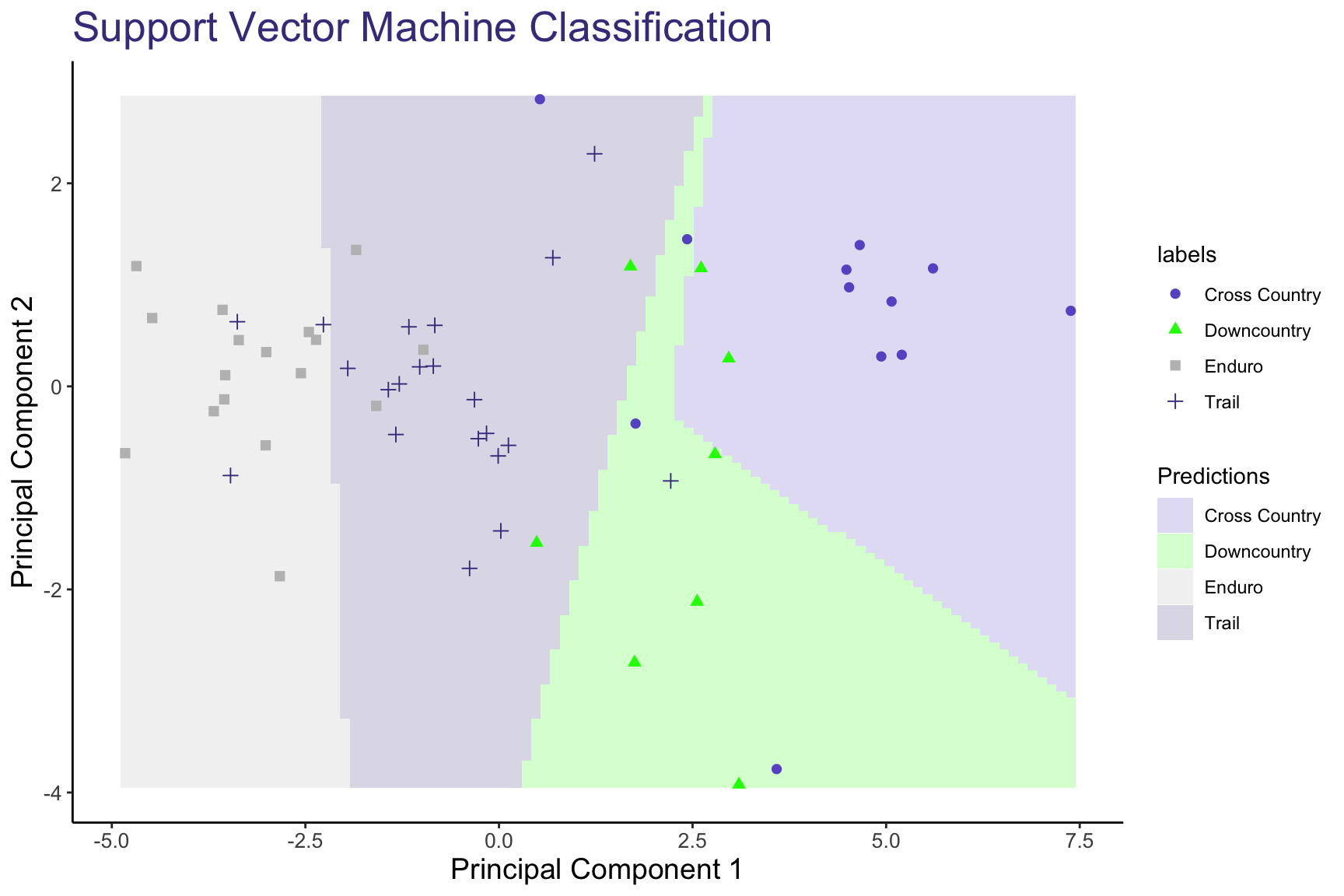 An interesting observation is that most of the boundary lines are more or less vertical, suggesting that most of the variation between classes is along Principal Component 1. We see this deviate between the XC and Downcountry boundary, however the validity of this boundary is still in question since the Downcountry category itself is more or less unofficial. Let’s try remapping Downcountry bikes to the Cross Country (XC) category and review the updated results. 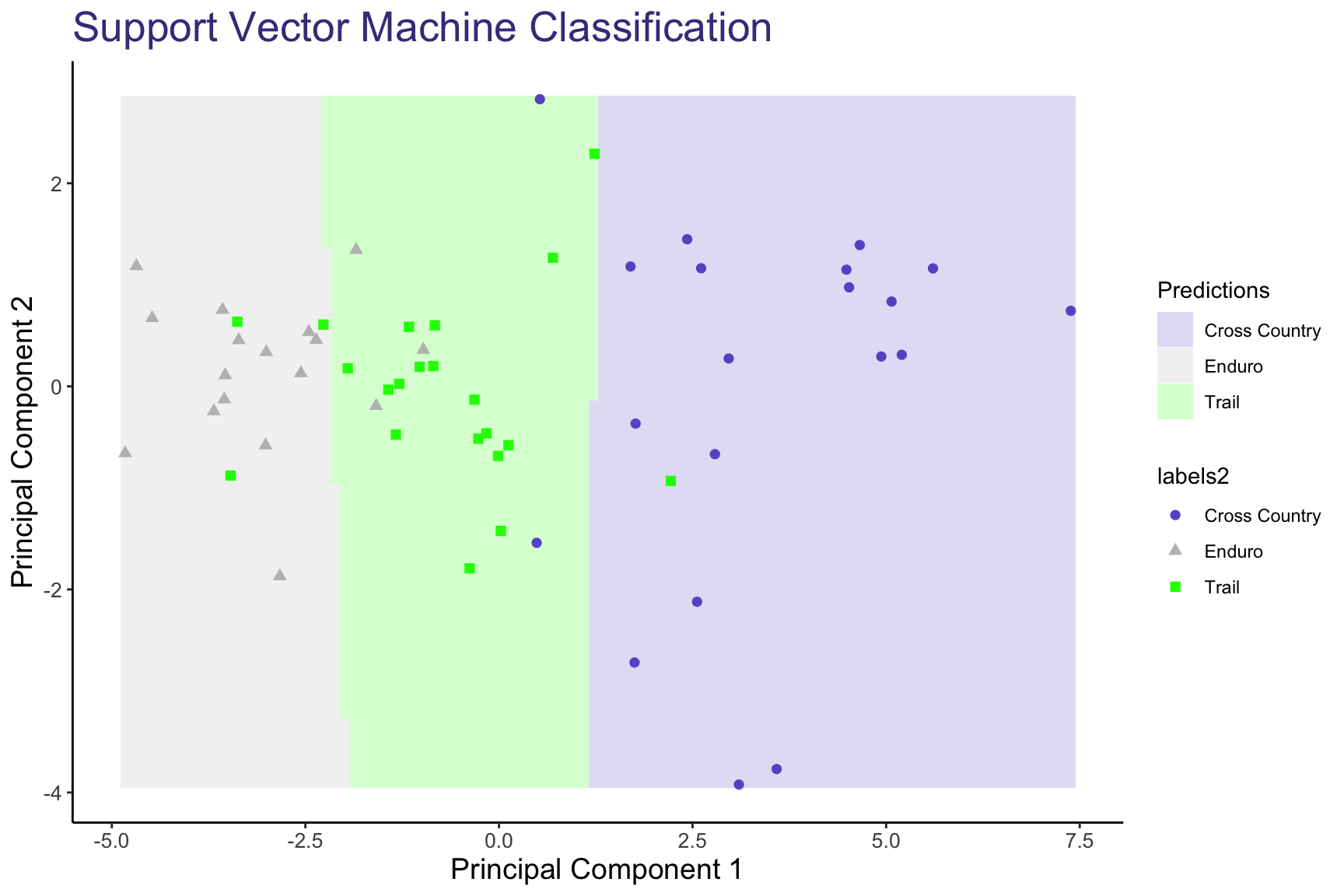 Mapping all Downcountry bikes to XC, the boundaries become almost entirely vertical, again suggesting that the classification of bikes can be attributed to Principal Component 1. The distinct regions appear to be accurate predictors of the 3 bike categories and are simple to explain, which would mean that we have effectively reduced the bias in our model.

Let’s look at an example from the data above. Some bike companies, like Transition and Revel, do not explicitly categorize their bikes like others do. For these brands, we categorized them based on general attributes, as well as media coverage of them. Let’s take a look at the Revel Ranger: Mapping the Revel Ranger to its first Principal Component we get a value of 1.7 which puts us right around the boundary between Trail and XC, which lines up with the PinkBike editors’ labelling of Downcountry in the video mentioned in the Overview section.

There are a few opportunities to improve the analysis included in this presentation and forthcoming report:

Misc. The extent of this post was written in R. The full blog post can also be found on Medium here. The source code, data, etc. can be found on Mike’s GitHub here. If you want to reach out with thoughts/feedback/ideas for improvement, please either leave a comment on this post or find my contact info on my blog site.